Meet Cute, the Telugu omnibus now streaming on SonyLIV, not to be mistaken with Alex Lehman’s film of the same title also released this year, is not really about meet-cute, at least in the strictest sense: how does an aging journalist’s encounter with a young woman in an immigration office qualify as ‘meet cute’? Or for that matter a mother-in-law sounding out her future daughter-in-law?

This technical detail notwithstanding, this anthology has a lot to recommend itself. It is airy and upbeat, sunny and optimistic. Although it tends to get exceedingly worked up about relatively minor crises, it does have its heart in the right place. 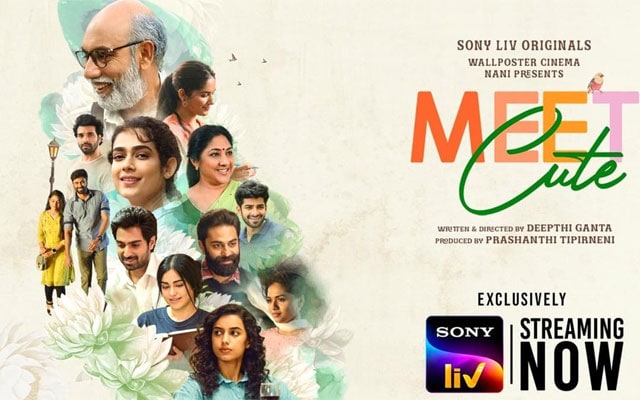 Of the five episodes in the anthology, my favourite is Old Is Gold, where the redoubtable Sathyaraj (does he ever disappoint!) plays a 70-plus man applying for a visa to travel abroad. Going by the way his hands shake, Mohan Rao seems to be suffering from Parkinson’s Disease. But let’s not look for God in the details here. Not on this anthology.

An aura of a breezy summer evening wafts through the collection. Be happy to get something that is light without being inconsequential. When Mohan interacts with ‘edgy wife’ Saroja (Ruhani Sharma), he is delighted to know she shares her name with his wife. What follows is gyaan over sandwiches on why an over-protective spouse is an asset and not a hurdle in a marriage.

This brings me to the one peculiar irksome trait in this anthology: every spouse/ suitor is a model partner: kind, considerate, gentle, compassionate…. So much so that it begins to look suspiciously unreal. In Star Struck, Adah Sharma (she is star in Hyderabad, so I’ll buy that) gets a lift from a stranger (Shiva Kandukuri), who is kind considerate (etc, etc) to the point where I began to suspect he was a closeted serial killer.

Of course not! He is just a fairytale good guy that the superstar happens to meet. Their interaction stretching into coffee and gupshup could have done with some robust energy. But nonetheless, this one works for me.

The one that doesn’t work at all is Meet The Boy, where Varsha Bollamma plays the most unlikeable, unreasonable woman meeting a man arranged by her mother. All through the meeting, she is surly and unpleasant. while the man (Ashwin Kumar Lakshmikanthan) worships the ground on which she doesn’t walk, so much so that I wanted to rap him hard on his head, to wake him up from the romantic reverie.

In L(aw)ove is another likeable story marred by a near-perfect son-boyfriend. Luckily there is not much of him in the screenplay. The focus is on the girlfriend (Akanshha Singh) and her prospective mother-in-law (Rohini, splendid) who sizes up her son’s girl like tomatoes at a vegetable market. This one-afternoon-with-my-son’s-girl idea is well explored, though the story does have a pacing problem.

In fact, I caught out the editor napping at several points. Especially in the last story, Ex-Gilrfriend, where newcomer Sanchitha Poonacha spends an evening on the beach with her husband’s ex-boyfriend.

I do hope she had a better time than we did. For all its flaws of excessively benign male partners Meet Cute works for the most part. Director Deepthi Ganta seems to think love makes the world go around. Who are we to argue ?

Whenever I see a truly original Indian film, I feel like doing cartwheels. And if it is original and engaging, like this Tamil film, nothing like it. Love Today is almost entirely devoted to doing a savoury probe into the culture of the smartphone .

The phone is indeed the central character of the devious plot. Pradeep Ranganathan, who wrote the screenplay based on his own short film App(a) Lock, is a man of ideas. Though saturated in schmaltz sweetness and foreseeable solutions to tangles in the repartee-heavy plot, the screenplay in spite of its filminess(as in filmy and flimsy) succeeds in tearing out a telling point on how pathologically dependent modern relationships have become on the content of one’s phone.

The film aptly begins at a smartphone factory where we see phones being churned out, then moves to a phone outlet where our unlikely hero Pradeep (played by the writer-director) buys a phone for his girlfriend Ivana (Nikitha) who must now find a way to explain the expensive gift to her father.

From this common middleclass smartphone-related crisis the narrative constructs a clever if somewhat exaggerated and mildly dystopian plot about the paranoia that love relationships suffer due to the phone.

You really don’t want to know what’s on your partner’s phone, do you? The film makes a strong case against phone-prying. Trust, says the film, is the main thrust in modern relationships. Trust your partner even if he or she gives you ample reason not to. The film says what he or she hides in the phone(mainly interactions with the opposite sex) do not prove the quality of your partner’s devotion.

I am not sure I buy that logic. But yes, one needs to trust unconditionally for any relationship to survive.

There is an elucidative flashback where the hero during his childhood is shown repeatedly digging out a seed he had planted to see why it is not growing into a tree. The mother , played by Radhika says, “Let the seed remain buried. Trust in it to grow.”

Motherly gyan comes in very handy in this phoney fabl. But why must the matriarch in Tamil-Telugu films almost always be so loud and aggressive towards their sons? Is the aggression an Oedipal issue?

Love Today is not only about Pradeep and Ivana discovering a space beyond the phone screen for their relationship to breathe. It is also about Pradeep’s sister Divya(Raveena Ravi) and her growing dread that her seemingly perfect fiancé Yogi(played by the over-used Yogi Babu) is hiding some awful secrets in his phone.

Admittedly this smart film about the smartphone overstates its case on several occasions. The film is way too loud and insistent, drawing out its plot justifications with whoops of see-we-told-you self congratulations.

But the message in spite of being heavily underlined does succeed in coming through.

While Pradeep Ranganathan scores significant points as a storyteller, I am not sure he fits the bill as the leading man. Pradeep is notably lacking in charm or the ability to hold the camera in dramatic places. Some of the excessive emotive energy , like those times when Pradeep taunts and heckles his girl after another discovery on her phone, is written into the plot. Pradeep is just playing along.

The real hero of this phone-and-games drama is the talented Sathyaraj. Playing the heroine’s father he not-so-casually suggests that his daughter swap her phone with her boyfriend for one day. It is a masterplan designed to open up secrets that are best left buried.

Here's why The Content Czarina Ektaa R. Kapoor is called...