Beating China at their own game: Indian Army is using Chinese cameras to spy on Chinese drones

Beating China at their own game: Indian Army is using Chinese cameras to spy on Chinese drones Attack drones and cameras drones have become a huge menace for the Indian armed forces, whether you consider drones being used by Pakistan, or by China. Most of these drones come from China and have been a major concern for the Indian Army. So, to combat this onslaught of drones, the Indian Army had to do something. What they ended up doing, is ingenious, inspiring and downright brilliant. 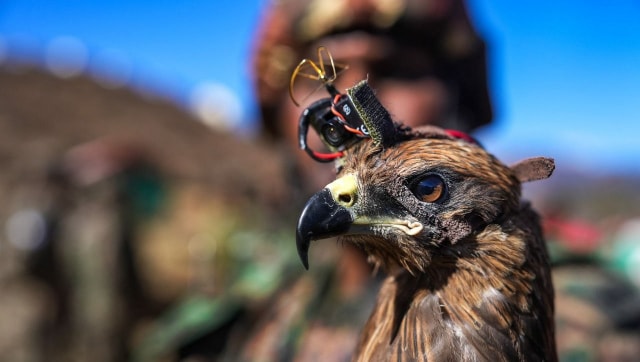 The Indian army is going to use China’s own weapon against them. The Indian Army, will fight Chinese drones, using camera modules sourced from China.

#WATCH | A Kite trained by the Indian Army to prey on drones displayed in action at the ongoing Indo-US wargame Yudhabhyas in Auli, Uttarakhand pic.twitter.com/Bjha3gKaNS

The Indian Army recently demonstrated a new drone-hunting capability involving high-resolution cameras and a well-trained black kite. The new capability, which is meant to bolster the country’s surveillance along its border with China, was unveiled during a US-India bilateral military exercise. The black kite is mounted with a spy camera on its head to detect and neutralize Chinese drones. The spy camera that is being used with these kites? Well, they are made in China.

Eurasian Times reports that the spy camera which the Indian Army is using for the kite-based anti-drone systems is being sourced from a Chinese manufacturer. A close-up photo of the trained bird showed the logo of the camera’s developer, “FX.” The company is reportedly based in Shenzhen and specializes in wireless backup camera systems, Eurasian Times found.

“The FX798T Micro FPV Camera and 5.8GHz 40CH 25mW VTX is extremely small and could be installed on almost anything. The unit is ultra-lightweight, so it is easy to place on any aircraft without affecting the centre of gravity,” said the Eurasian Times, quoting an e-commerce website.

A spokesman for the Indian Army, Colonel Sudhir Chamoli explained that the project to train kites as anti-drone systems had started way back in 2020.

#WATCH | A Kite trained by the Indian Army to prey on drones displayed in action at the ongoing Indo-US wargame Yudhabhyas in Auli, Uttarakhand pic.twitter.com/Bjha3gKaNS

Trained by the Remount Veterinary Corps Center, the ite can perform basic surveillance roles such as relaying images of enemy territories. The kites are fitted with a GPS tracker which is tied to its body and works in tandem with a military dog that hears enemies and alerts handlers. Once a drone is located, the kite uses its sharp claws to bring it down.

Flipkart launches smartphones at sale prices before The...

Here's why Apple is ditching the 5.4-inch iPhone Mini with... Virat Kohli shares photo of trek with Anushka Sharma and... What is Zombie fungus which has its reference in the Disney+...

What is Zombie fungus which has its reference in the Disney+ Hotstar's The Last...